Axon Evidence - Streamline management, storage and sharing of all your digital evidence

SPARTAN 3 – the Official Device of Warriors 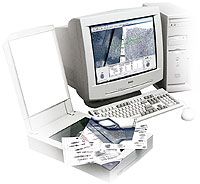 AFIX Tracker® was designed for Detectives and Latent Print Examiners to have control of their own AFIS (Automated Fingerprint Identification System). The system runs in Windows, on a standard off-the-shelf PC. The current release of Tracker: accepts images scanned from ten-print cards or most live scan devices, exchanges files between agencies in accepted EFTS/NIST formats, plots minutiae automatically, and matches both fingerprints and palms with superior technology. Since its release, seven years ago, hundreds of Sheriff's departments and Police departments, across the U.S. and around the world, report solving countless cases that, in their words, would have gone unsolved without Tracker in their agency.