Last issue I discussed the numerous less-lethal or, as I prefer to call them, compliance and incapacitation munitions, available to SWAT teams today. This issue I'll discuss tactical considerations, delivery systems and training for these weapons.

This requirement came to life for us at a call-out this year. While putting into action a plan to take an emotionally disturbed person (EDP) armed with a pistol into custody, he began to draw his weapon from his jacket pocket. The offender's violent response made it necessary for the lethal-cover officer, armed with a .223 rifle, to engage the suspect and stop his deadly force actions.

Team the lethal-cover officer with the less-lethal deployment officer. They should stay together and not separate. The lethal-cover officer must have the same approximate view as the less-lethal deployment officer in order to protect them. Always have designated officers armed with live-fire weapons, ready to deliver deadly force when and if it becomes necessary. Lives depend on it.

Attics, Closets, Crawl Spaces & Basements
When you have delivered all of your chemical munitions and get no response, it will come time to enter and locate the suspect. Go slowly, and use all your assets (K-9, mirrors, pole cameras, robots, etc.). Port windows before entering a room, and be careful. The suspects are almost always hiding. Look everywhere. It's amazing how small these people can get to try to hide themselves.

Delivery Systems
Dedicated Systems & Predeployment Checks
I know of many teams that interchange munitions and delivery systems and have never had a problem, but I can also tell you of a number of instances where teams have had problems in this area. I know of two incidents in which offenders were shot with lethal 12-gauge rounds instead of the 12-gauge beanbags the team intended to deploy. There's a big difference between shooting someone in the leg with a 12-gauge slug instead of a 12-gauge beanbag. And it's difficult to explain or defend something like this after the event.

To illustrate this point during training, I line up the many different 12-gauge rounds and 37mm rounds for the officers to view. These projectiles are made with different colors and lengths, some with writing, some without, some transparent, most not. Many of the ends are very different-some have exposed projectiles and some are sealed. If shells have writing, it's often in different colors. The key: They are all different, and while this should help officers identify the round, it many times adds to the confusion.

To minimize the possibility of intermixing and or interchanging the wrong munitions, consider adopting the following simple guidelines.

Third, do not intermingle ammunition types in an ammo can or carrier vest when you need to take reloads with you, which will include most cases. This is a formula for disaster. Keep only one kind of munition per can and one kind of munition in your vest. Ensure you get this correct every time.

I know many teams have very restricted budgets and just cannot purchase multiple delivery systems. If you must use the same delivery system to deliver different munitions, at least consider the second guideline above. Don't carry a multitude of different munitions with you. There's a big difference between striking a suspect with a 37mm baton round and a 37mm barricade-penetrating round. Whatever you do, put some checks and balances in place to ensure you deliver the right munition.

Weapon Configuration
Ensure your delivery systems are maintained properly, tested on a regular basis and have the attachments you need. After testing and evaluations are complete, carefully select aiming devices, lights and slings.

One area concerns me: the attachment of compliance and incapacitation delivery systems to lethal weapons. The theory is you will have both at your disposal immediately. Not bad in theory, but how practical in the high stress, dynamic, ever changing situations we find ourselves in? Some of the marriages I've seen and tested work well, others not so well. For the highly trained, very active teams and personnel, these delivery systems may prove manageable when deployed properly. For many others, they may present decision issues that cause hesitation or contribute to the selection of the wrong system during highly stressful, quickly evolving situations. Again, you must test and train with whatever options you select.

Redundancy
If it's good enough to have one, it's probably better to have two. Seriously consider fielding redundant delivery systems. On many occasions, my team has had to simultaneously or consecutively deploy these munitions in an extremely short period of time. When the situation develops to the point of action, you must have your options up and running. If, for instance, you have only one delivery system for your baton rounds and the subject decides to exit on the opposite side of the objective, you can run into problems not having your assets where you need them. 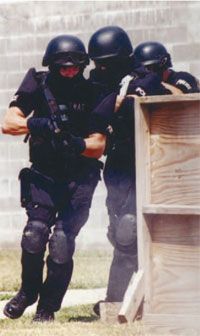 Training
This topic could take up another entire article, so I will just hit some of the high points. Your training must be recent, relevant, realistic and documented. I see many teams fall short when it comes to documentation. Simply put, if it's not documented, it didn't happen. Write complete, accurate training reports that reflect what you accomplished during a given training session. The report should include the goals, objectives, tasks performed, equipment utilized, tactics and techniques practiced, a critique, corrective action/retraining that occurred and the performance observed. Failure to document or embellishing training reports will come back to harm you when your actions come under scrutiny.

For each munition and delivery system used, your team must conduct an initial end-user qualification/certification course and a yearly recertification. This training must include a written examination, practical application, practice, scenario training and a qualification course of fire with realistic standards. It's expensive to conduct this training, but it's essential. Do not scrimp in this area. Realistic training develops capable, confident officers who can use the munitions in accordance with your team's established guidelines.

Last, use highly skilled, competent instructors. Entirely too many "instructors" out there have attended a few classes and have a nice stack of instructor certifications, but have virtually no real-world experience. Some have no police training and/or have never served in the military. Some have never had to put into practice the tasks they teach. Good instructors embrace knowledge, experience, demonstrated ability and continuous efforts to improve and perform.

Conclusion
Your actions and utilization of these munitions should always remain reasonable in light of the situation you face; use them to de-escalate the situation and gain compliance or incapacitation of the offender without having to resort to higher levels of force. Train hard, for the day will come.

Sergeant Ed Mohn is a 16-year veteran of the Libertyville (Ill.) Police Department. He has been a member of the Northern Illinois Police Alarm Systems Emergency Services Team (NIPAS-EST) since 1991 and serves as the entry team leader. Mohn has been awarded the NIPAS Medal Of Valor, the NIPAS Commendation Medal and the Illinois Tactical Officers Association Unit Citation. He currently serves on the Illinois Tactical Officers Association Board of Directors and the Illinois Law Enforcement Alarm Systems Operational Committee, and he's an Illinois state certified lead instructor in a wide variety of tactical and firearm-related disciplines.

Don't miss out on the best information in tactics, technology and training for the law enforcement professional. There are other public safety trade publications, but none of them provide the quality information you need to get your job done safely and effectively. And none of them focus their editorial content to the needs of you, the line officer, trainer, supervisor and middle manager.