StrongArm for RIT and Forcible Entry 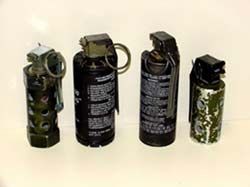 In June 2005, I wrote about diversionary devices and the value of "bang sticks" in their safe and effective use. I received a number of emails following that post, and in response am offering the following foundational information that addresses:

The first documented use of an NFDD was in 1976 at Entebbe, Uganda. The bright light and thunderous report distracted the suspect's attention, and allowed Israeli team members to affect the rescue. In 1977, the GSG9 followed suit at Mogadishu, Somalia, and the 22nd SAS did likewise at Princess Gate in 1980. When these incidents occurred, progressive operators across the globe "perked right up", and SWAT pioneers in the Los Angeles area began looking for devices that would create the desired effects.

This effort was met with negative results, as it was quickly learned that there was nothing available on the U.S. commercial market. Tenacity being a trait of most tactical teams, the U.S. operators wouldn't take no for an answer. They turned to the military, which had been using "big bangs" in training for many years. Readily available devices were tested, and several eventually were used in operations. The lessons learned became a catalyst for commercial development, and led to the products that are in use today. The general evolution is outlined as follows:

Several critical injuries and catastrophic fires later, SWAT commanders were wondering whether the cure for the flying fuze was worse than the disease. The search for the safer NFDD continued. 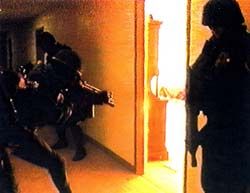 As noted in the earlier text (Policeone, June, 2005), the primary causative factor in such cases involves intimate contact with the device; either by officers during handling, suspects following hand deployment, or officer/suspect contact with a post blast "launched" metallic body.

1. Ignition near the user's hand: These injuries generally involve officer mishandling-post event "explanations" aside. In the recent past, users have lost entire hands, parts of hands, and flesh from various parts of the body (including the face) during operational deployments and training exercises. Issues most often involved include:

Noted exceptions have involved a reload only from a non-bursting canister, that was  being held in the users hand as it ignited and effectively functioning as a bursting canister, and non-bursting canister "direct jet effect" traumatic injuries.  In overly simplistic terms, the non-bursting metallic canisters are the most common law enforcement devices for a reason. They offer fairly predictable performance, and should an accident occur are as forgiving as any such device can be.

2. Contact with launched metallic canisters: A number of situations have been documented in which the bodies have launched at the moment of deflagration, and struck persons in the room. The distances and circumstances are varied, and operators have been struck in the face and seriously injured. Manufacturers have improved designs to address this issue, but many of the devices proven to launch are still in the field. Thousands have been deployed in training and actual operations, and from a statistical standpoint the potential for a launch injury is low. Likewise, the potential does exist and serious injuries have occurred. As a result, it is reasonable and prudent to take steps to ensure the safety of officers and citizens alike. This simply involves hand deploying a device that has no record of launching, or using the "bang stick" as discussed previously.

3. Civilian contact during ignition: The key to avoiding this is ensuring that the device is placed in a manner that precludes such intimate contact with the suspect. The first step in proper hand placement is learning whether your device will "blow where you throw". This is determined by spending a little time at the range doing tests and evaluation. Throw an inert device on a variety of surfaces, and see if it will stay within a foot of where it contacts. The most common devices on the market today are metallic non-bursting canisters. Most are cylinder shaped and roll easily on hard surfaces. Some agencies have minimized the roll by securely duct taping short lengths of dowel rod to the sides, or sought out other devices/methods to keep the device in proximity to where it was thrown.  Once this issue is resolved, the next step involves emphasizing the following areas during training:

In the absence of a pre-event plan, officers have deployed devices directly on top of the occupants, or carried the live device in their hand as they participated in the clearing. Neither of these options should be considered viable.

Noise flash diversionary devices continue to be a viable tactical option in certain police circumstances. Officers and agencies must ensure that they recognize potential risks involving their use, and do what it takes to reduce the probability of such negative outcomes.

Steve Ijames is a major with the Springfield, Missouri Police Department, and has been a police officer for the past 27 years. Steve formed his agencies full time tactical unit in 1989, and worked his way through the structure from team leader to special operations commander. Steve was an original member of the National Tactical Officers Association (NTOA) board of directors, and was the course developer/lead instructor for the NTOA and IACP less lethal force options "train the trainer" programs. Steve has provided such training across the United States and in 31 foreign countries, and frequently provides agency litigation defense when the use of such tools are called into question.

He can be reached at lesslethal@aol.com.