Axon rolls out the next level of police technology: Live-streaming body cameras

Cincinnati is the first city to equip its force with cameras that turn on automatically when guns or Tasers are drawn, letting commanders see live events unfold

The term that keeps coming up is “game changer.” 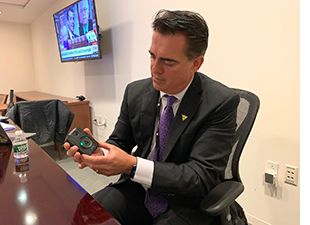 Axon, the largest supplier of body-worn cameras for police in the United States, on Tuesday rolled out 1,000 new cameras for the Cincinnati Police Department that have live-streaming capability. This will enable officers on the street to show dispatchers or commanders a crisis situation in real time and allow rescuers to find an officer who is down or lost.

The system will automatically activate the camera as soon as a gun is drawn, emergency lights are activated or a Taser is powered on.

The cameras will not have facial-recognition capability, Axon founder and CEO Rick Smith said in an interview, and access to both the live-streamed video and the archived footage will be tightly controlled. To solve the problem of massive amounts of data piling up, the footage will be stored in a computing cloud maintained by Axon and Microsoft, Smith said.

The software accompanying the cameras will enable officers to receive transcripts of the audio in the footage, and the cameras will film in 1080p, greatly improving the quality of still images often used by police in investigations.

Want to know more about Axon?
Get info