When the Palm Beach County Sheriff’s Department, West Palm Beach, Florida, recently underwent remodeling of its evidence storage areas, it incorporated mobile storage solutions to significantly extend its storage capacity. The Palm Beach County justice system tries 8,000 to 10,000 criminals a year and includes a massive county jail facility, the 13th largest in the country, as well as an extensive Technical Services Bureau, which oversees all evidence administration, among other things. 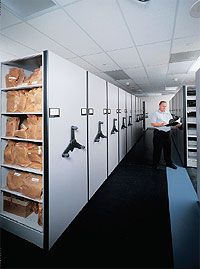 Dan McBride, Deputy Director, Technical Services Bureau of the Palm Beach County Sheriff’s Office, responsible for the crime lab, crime scene investigation, finger print identification and evidence storage, explained that storage regulations have significantly changed in recent years. “New storage requirements have placed a significant burden on our evidence storage,” he said. “We now take in more than 1,700 submissions a month and most of those will stay in storage for five generations.”

Outside storage was not an option for increasing evidence storage. Ensuring proper offsite security would have been difficult and costly, requiring a retrofitted facility for security and a separate full-time security staff. “We really had no other option but to solve our storage problem onsite,” explained McBride. “The mobile systems have extended our storage capacity in our existing facility by five-to-six years and allowed us time to explore a more extensive long-term solution.” 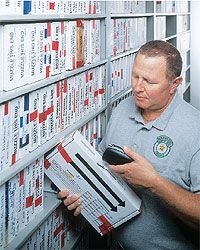 “We quadrupled our weapons storage and doubled our evidence storage,” McBride said.

Maintaining tight security and accounting for every item is also critical. Each item is bar coded, entered into a tracking system, and assigned a storage location. The entire inventory is reconciled annually through a rolling physical inventory.

“We don’t know what the future holds for forensic science and DNA technologies,” McBride explained. “Our job is to help bring criminals to justice and it is important to carefully maintain and document evidence for future trials. The Spacesaver systems have helped us to attain that goal.”