Firearms: Get a Grip - How to hold your pistol

The most basic pistolcraft fundamentals-body position, trigger control and use of the sights-don't mean diddly-squat if you don't properly hold your gun. Like all things related to combative shooting, controversy exists regarding how to grip your "roscoe"; this controversy, like all controversies, revolves around personal opinion. And, like all firearms instructors, I have my opinion on the subject, and I fully intend to express it in this column. Nevertheless, I owe it to the readers to give solid reasons as to why I express a certain viewpoint so they can make informed decisions regarding whether this viewpoint is right for them.

Like many of you, I am a product of my own experience. Over the past 30 years, I have faced my share of undesirable people who have hit me, kicked me, puked on me, cut me, shot at me and tried to run me over. I have fought to save my life and the lives of others. I have made hundreds of SWAT and narcotics entries looking for armed bad guys, searched buildings for felons, tussled with inmates in the jail and walked the back-woods looking for escaped fugitives. I say this only to inform readers that my tactical opinions are based on real-world experience, not time spent sparring in the gym or shooting on the range. Training is excellent, but it works best when combined with field experience. Unlike some instructors who teach techniques and render opinions on issues they have never had to use for real, I have the scars of practical experience. Enough said.

Unlike the long gun on which the shooter has four points of contact (shoulder, cheek, rear grip and forward grip), the handgun offers 1.5 points of contact (shooting hand and whatever the support hand can grab on to). However, this doesn't mean the support hand is not important. Quite the contrary: The support hand stabilizes the handgun and makes the shooter two to three times more accurate than if the shooter used just one hand. Why? The shooter must perform two tasks with the shooting hand when firing a gun: hold the gun and press the trigger. In the interest of being visually descriptive, I use the word press because I believe it truly describes what the shooter wishes to do with the trigger: Use the end of the finger to depress the trigger until it completes its task; i.e., fires the gun. This is much like pressing a door-bell button: You push or press the button until the bell rings, and then back off. You don't continue to push in until the button breaks. To me, pulling encompasses the whole hand and arm, and squeezing is something performed by all the fingers. 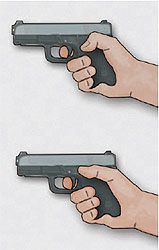 While there are a few people who can keep a convulsive grip on a pistol and still press the trigger, they are in the minority. Most moderately trained shooters (i.e., most law enforcement personnel) will release the tension of their fingers when they try to separate their trigger finger. This leads to what I call "milking the grip," an action of squeezing the whole hand in a downward motion like milking the teat on a cow. This total squeezing of the hand results in the shot going low left or right, depending on whether the shooter is left or right handed. The support hand helps retard this action but does not totally correct it. To totally avoid this action, the shooter must perform an independent press of the trigger by the trigger finger-the hardest of shooting skills to master and the subject of a future column.

As I previously stated, most must relax their shooting hand somewhat in order to achieve independent finger action, and that places more support responsibility on the weak/off/support hand. While some advocate a shooting-hand grip with the thumb locked down, I have found this inhibits the support hand's ability to make contact with available grip space because the downward-pointed thumb gets in the way. Some maintain the bent thumb offers a stronger grip, but I have not found this to be the case. Try this: Hold your gun in your hand as tightly as possible, with a locked-down thumb. Hold the grip tightly, but straighten the thumb. You will notice the grip stays just as tight regardless of whether the thumb is held straight or bent down. However, by straightening the thumb, you create an open space that allows you to insert the large muscle of your thumb against the grip. The support-hand fingers then wrap around the shooting hand fingers, creating 360-degree contact around the grip. No open spaces, also known as "weak spots," are evident on the grip. Such weak spots give the recoiling firearm an avenue of travel, which accentuates muzzle flip, slowing subsequent shots.

The 360-degree wrap of the grip gets the gun back on target much faster than the thumbs-down grip. Check out the photo showing me working with Burlington (Vt.) Police Officer Dan Brady on the thumbs-forward grip (p. 64). You can see an ejected case flying away just above the gun, but Dan's .40 caliber Glock 22 is already back on target. This type of recoil control gives the shooter shot-to-shot times around .25 seconds, even with hard-recoiling, .40-caliber-plus handguns. In addition, thumbs-forward allows the shooter to present the gun to the target by pushing it in the direction of the thumbs, offering enhanced aiming capabilities.

If you have not tried the total-contact, thumbs-forward grip, you owe it to yourself to try it and see if it works for you. It might and it might not, but don't you think you should give it a try before you make up your mind? It's been tested in the street, and believe me, it works.

Dave Spaulding is a 28-year law-enforcement veteran, retiring at the rank of lieutenant. He currently works for a federal security contractor. Having worked in all facets of law enforcement-corrections, communications, patrol, evidence collection, investigations, undercover operations, training and SWAT-he has authored more than 600 articles for various firearm and law enforcement periodicals. He is also the author of the best selling books Defensive Living and Handgun Combatives.

Don't miss out on the best information in tactics, technology and training for the law enforcement professional. There are other public safety trade publications, but none of them provide the quality information you need to get your job done safely and effectively. And none of them focus their editorial content to the needs of you, the line officer, trainer, supervisor and middle manager.