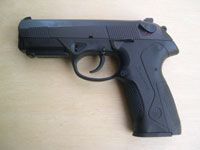 The Beretta Model 92 remains one of the most popular pistols of the modern era. For over two decades, it has been the official handgun of the US Armed Forces and is also widely used by law enforcement agencies. As with many successful designs, the M92 has given way to a number of variants including models with different trigger actions, safety functions and grip dimensions. It has also served as the basis for the M96 family chambered for the .40 S&W.

Despite its popularity, one quality has prevented the M92 from achieving even greater success. There is simply no getting around the fact that the M92 is a big gun. Users with medium to large size hands and long fingers are often at their best with the M92. However, people with small hands are at a deficit. The wide grip frame and 4.92 inch barrel can also make it a challenge to conceal. To address these concerns, Beretta recently introduced an entirely new pistol - the PX4 Storm. Incorporating a number of in-demand features into a design that is lighter, smaller, and less costly to produce, the new PX4 Storm is superbly engineered.

The PX4 Storm is a full size pistol built on a polymer frame. Currently available in 9mm and .40 S&W, future plans call for models in .357 SIG and .45 ACP. Unloaded, the PX4 Storm tips the scales at a trim 27.63 ounces. Total length is 7.55 inches and the barrel measures 4.02 inches. In creating the PX4 Storm, Beretta used a number of technologies pioneered in earlier designs. The PX4 Storm is not Beretta's first polymer frame centerfire pistol. That distinction belongs to the 9000S compact. The service size PX4 Storm fills an entirely different niche and the technopolymer reinforced fiberglass frame is light, yet extremely durable.

The PX4 Storm comes complete with three interchangeable backstraps to accommodate a wide range of hand sizes. With the aid of a screwdriver, grips can be swapped off in very short order. This quality is especially appealing to users with smaller hands who have had problems in the past with grip circumference and trigger reach. Different size magazine release buttons are available as an option. The PX4 Storm uses an innovative locked breech design similar to that of the M8000 Cougar. Instead of the falling block as in the M92 or a Browning style cam, the PX4 uses a super strong rotating barrel. This will, no doubt, contribute to an extended service life and greater accuracy potential.

Like many contemporary pistols, the PX4 Storm is outfitted with a Picatinny rail. The integrated accessory rail allows for the rapid attachment of tactical lights and laser aiming devices. Many professionals now recognize that the ability to mount a tactical light and/or laser can help make the pistol a more efficient fighting tool. Beretta was wise to move in this direction. The slide and barrel of the PX4 Storm are coated with Beretta's proprietary Brunition finish. This matte black finish is resistive to corrosion and contributes to the businesslike appearance of the PX4 Storm pistol. The slide itself features grasping serrations fore and aft to facilitate manipulation.

Beretta has equipped the PX4 Storm with a somewhat unique set of sights. At first glance, they appear to be of the popular 3-dot pattern, but the careful eye will detect something a little different about them. The Superluminova sights contain a special photosensitive material that, (when exposed to a light source) will glow for up to 30 minutes. Both front and rear sights are dovetailed into the slide and this makes retrofitting aftermarket sights a relatively easy task.

The PX4 Storm 9mm received for testing was an "F" model with a traditional double/single action trigger. An ambidextrous slide mounted safety also serves as a decocker and allows the user to safely drop the hammer after shooting and prior to reholstering. Other variations include the "G" with a decocking-only function and a "D" double action only model. Beretta has also introduced a constant action only or "C" model with a shorter trigger travel and lighter trigger pull. The last three variations will be designated law enforcement only.

Magazine capacity in the PX4 Storm 9mm received for testing is 17 rounds. The .40 S&W copy will hold 14 rounds. Both calibers feature increased capacity over the M92 or M96. Magazine extenders that boost capacity by three rounds will be available for both calibers. On the range, the PX4 Storm proved to be a reliable and accurate pistol. The sample digested a wide variety of ball, frangible and hollowpoint rounds without incident and no malfunctions of any type were noted.

Shooting off a casual rest, 25 yard five-shot groups ran between two to three inches with a few under that mark. Best performance was achieved with Speer Gold Dot 124 grain +P hollowpoints, which averaged 2-3/8 inches. In a service grade pistol, it just doesn't get much better than that. Feel is a very subjective quality, but the PX4 Storm with the intermediate size backstrap fit my hand like the proverbial glove. This has, no doubt, paid dividends when firing fast-paced combat drills. Optimum fit pretty much guarantees the sights are right there and pointing characteristics are enhanced as well.

Can a polymer frame pistol be aesthetically pleasing? Although purists may have a hard time with this concept, the PX4 is indeed a little sleeker than many of its competitors. Its racy lines are a nice departure from some of the boxier contemporary pistols that proliferate in today's market. The Beretta M92 is a hard act to follow but the PX4 Storm may be the better mousetrap. Time will tell if this upstart can dethrone the king of the hill. With all it has going, I wouldn't be surprised if it succeeded.