Fifth Circuit: No qualified immunity for deputies who allegedly used excessive force against pre-trial detainee who died in cell

After the CDCR was ordered to improve its medical and mental health care facilities, the agency embraced eco-friendly construction

That California's state prison system is a national leader in energy-efficient building construction, resource conservation and renewable power isn't surprising. Rather it’s the unusual path the California Department of Corrections and Rehabilitation took – forced by legal decisions and voter ballot initiatives – to become a leader in eco-friendly correctional facility design.

A couple of decades ago in California, two class action lawsuits – Coleman v. Wilson (now Brown) and Plata v. Schwarzenegger (now Brown) – were combined because they shared a common problem. Each case was based on the assertion that tougher sentencing laws imposed in the 1980s created overcrowding issues that prevented CDCR from providing adequate medical and mental health treatment.

“The court’s remedy was to impose an inmate population limit of 137.5 percent of CDCR’s design capacity,” said Bill Sessa, Communications Officer for the California Department of Corrections and Rehabilitation. “The court appointed a Special Master to oversee CDCR’s efforts to improve mental health treatment and a Receiver to take over administration of CDCR’s medical program until the department was able to resume full control of that program after showing that it improved and could sustain it to the level that satisfied the court.”

As a consequence of the court’s rulings, ballot measures aimed at reducing CDCR’s inmate population to that lower level were introduced and ultimately approved by the voters.

The process of complying with the court’s mandate for improved mental health and medical care accelerated a decades-long effort by CDCR to reduce water consumption, improve energy efficiency and increase the use of recycled materials in the construction of its facilities.

CDCR has incurred roughly $3 billion in construction costs and conducted nearly 100 different construction projects, all of which have been certified at Silver or higher Leadership in Energy and Environmental Design (LEED) levels.

“We have constructed millions of square feet of new facilities to improve our delivery of mental health, medical care and dental treatment to inmates to comply with the settlement agreements,” said Sessa.

“All of this construction is certified at Silver or higher LEED levels.”

CDCR generates about 23 megawatts of power from solar fields at five prisons – Ironwood, Chuckawalla, North Kern, Tehachapi and Lancaster. The solar fields are operated by SunEdison and are on land adjacent to the prisons – outside security, electric fence but within the property line. 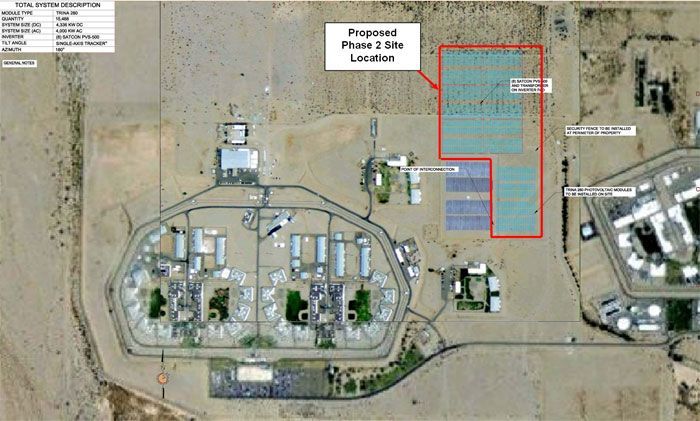 CDCR and SunEdison are planning to expand Ironwood State Prison’s solar power plant, which was originally activated in May 2008. (Photo/CDCR)

CDCR estimates savings to taxpayers of more than $55 million over the life of the contracts (about 20 years). SunEdison is responsible for all the costs of building and maintaining the solar fields. Any related costs are reduced by financial incentives from the three investor-owned utilities, through the California Solar Initiative Program, which is administered by the California Public Utilities Commission.

“One of the benefits of the solar fields – besides reducing our overall energy costs – is reducing greenhouse gas emissions by reducing our reliance on more traditional energy. We estimate that nearly one billion kilowatt-hours of solar-generated power will offset more than one billion pounds of carbon dioxide over 20 years – that’s equivalent to powering more than 89,000 homes and removing more than 90,000 cars from the road,” Sessa said.

“In addition to the solar energy projects, we have upgraded lighting systems in many projects. They range from computerized energy management systems and more efficient boilers to retrofitting lighting with LEDs. We estimate savings from reduced electrical use to be about $5 million per year,” Sessa said. In response to the recent severe drought throughout California, CDCR facilities have been administering emergency drought measures including:

CDCR has also redoubled efforts to repair and maintain underground water systems to eliminate leaks. As was previously mentioned, facilities have been outfitted with flushometers.

Sessa said these initiatives have led to a 25 percent reduction in water use over the last three years. 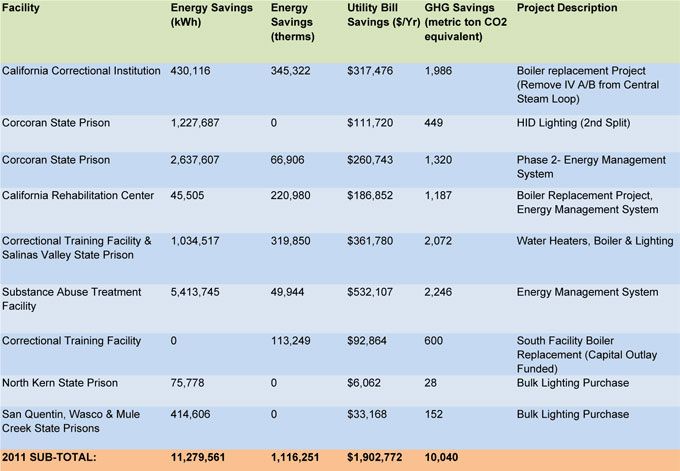 CDCR has constructed seven facilities to provide mental health treatment in the past five years. This includes a 45,000 square-foot facility to provide enhanced out-patient treatment at the California Medical Facility in Vacaville and an additional 64-bed facility there for mental health patients in need of acute care. Similar acute care facilities were built at the Central California Women’s Facility in Chowchilla, Corcoran, and the California Men’s Colony in San Luis Obispo.

In addition, the California Health Care Facility in Stockton – a $1.2 million facility that encompasses 40 buildings – opened in June 2013. It provides mental health and medical care to inmates with acute care needs to free up space in med clinics in each prison for the everyday needs of other inmates.

“We are nearing the end of a three-year project to remodel the medical clinics in each of the other 34 prisons to provide more private examination spaces to comply with HIPAA requirements and to improve the way we distribute daily medical prescriptions – about $800,000 total,” Sessa said.

In the last year, CDCR also has expanded bed space at Mule Creek and RJ Donovan prison in San Diego County. They have added a total of 2,300 beds, in addition to classroom and programming space.

A leader in LEED certification

“California has long been an international leader in setting environmental standards,” Sessa said. “Many of our practices are driven by directives from the Governor, who has set goals for conserving water and reducing greenhouse gas emissions. Those directives and executive orders are driven in part by the drought and the increased understanding of climate change.

“But beyond the directives, we believe it is important to be good stewards of the environment and that policy has been set by the department even before some of the current Governor’s directives were in place. It reflects California’s long-standing environmental ethic. Plus, among state agencies, we have a far bigger architectural footprint than most, especially since we operate 35 mini-cities with a total of 130,000 inmates.”

CDCR is not the only state prison system to seek to “go green” – with similar efforts underway in many states – but the agency has set a high bar for how to achieve significant savings in both energy and money. What is your agency doing? Sound off in the comments section below.

Calif. town sued to keep prison open, but judge rules Gov. can shut it down

6 years after only women's prison in La. flooded, a new one is being built